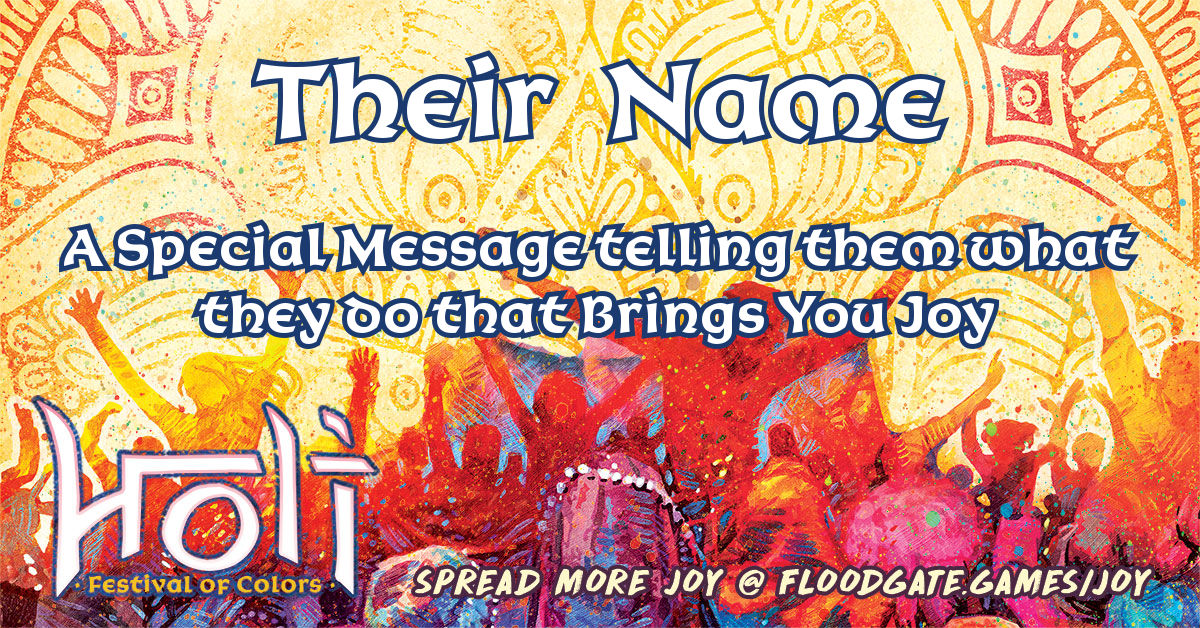 Back it on Kickstarter

A Game of Spreading Color and Joy
by Julio E. Nazario

Every spring, celebrants gather to spread colour and cheer during one of India's most vibrant festivals. With your friends, move around the festival grounds throwing colored “gulaal” powder onto each other and the crowd. Aim higher and let your color fall from above on as many people as you can. For holi is a time for playful mischief and a little friendly rivalry is just what the festival calls for...

Gain joy by throwing your color on the boards (higher levels are worth more points), getting color on other players or from collecting sweets. The player with the most points after any 2 piles of Color Cards and/or Color Tokens are depleted wins the game.

Holi: Festival of Colors - A Game of Spreading Color and Joy for 2 to 4 players that plays in about 30 minutes. Carefully designed by Julio E. Nazario with illustrations by Vincent Dutrait.

Back it on Kickstarter

Holi used to be a game about trees. Well, a tree… The World Tree. That was the name of the prototype we were pitched by then brand new designer Julio E. Nazario at Geekway to the West in 2018. He opened the box, took everything out, and flipped over the bottom to set up one of the boards -- I was hooked. As a life-long sucker for unconventional components, I loved this use of the game box as part of the board. The monstrosity took up nearly the whole table, with three boards all in a line and seemed like a gimmick, but as we played I learned that the elevation of each board mattered. In The World Tree, players are elemental shamans climbing up a tree (moving to the next board), dropping tree spirits in patterns shown on your cards, and racing up the tree to drop spirits down and causing cascading chain reactions as falling spirits remove other spirits. It was an incredibly tight system… and, unfortunately, quite complicated to explain.

After playing The World Tree with more of the Floodgate team, we were all hooked on the puzzle-like card selection and clever use of the box to represent climbing the tree. Coincidentally, we had recently been talking about trees. A lot. Development on Bosk, our main release of 2019, was right in the middle of development and we were just beginning to make progress on artwork when Julio brought his tree game to us. It didn’t seem like the best idea to publish back-to-back games about trees, and not getting a lot of love for the shamans and spirits, I decided The World Tree needed some new leaves.

Having spent two decades as an electronic music DJ and event promoter, I developed a fascination with parties, gatherings, festivals and the like… If there’s great music and a ton of people, I’m interested! Somewhere buried in research about festivals around the world, I learned about a festival called Holi primarily celebrated in India. It’s always interesting how small things sit in the corners of your memory until one day when you least expect it, they come racing back to the front.

Fun Side Note: An intricate and fascinating genre of electronic music called Goa Trance is named after the state of Goa in India. Look it up, crazy stuff!

And that’s just what happened! When sitting and brainstorming about potential new themes -- fireworks displays, water-balloon fights -- nothing was quite clicking to meet Floodgate’s freshly-formed goal of staying laser-focused on publishing games with relatable themes that tie in to real life, much like Sagrada (the beauty stained-glass windows) and Bosk (the majesty of trees in national parks).

Then, I remembered perhaps the most memorable thing about the Holi Festival -- color. Celebrants gather and throw a profusion of colored powder, creating an vibrant and explosive feast for the eyes. It felt perfect. Instead of climbing a tree, you were climbing higher up a courtyard, aiming higher in the sky. Instead of spirits cascading down, bursts of color cascade from the sky… and on other players, of course.

The Trouble With Firewood

The change in theme set everything in motion to move forward bringing the game to life visually. Through a chance encounter with a personal “grail” illustrator Vincent Dutrait at Essen (as thankfully tends to happen at such events), I told him about the game, the theme and my ambitious plan of trying to fit as much color as possible into one game. Through a subtle but infectious smile, Vincent said he was in.

Development continued, as the dev team stoked Julio’s brilliant spark into a growing flame. Simplifying action selection, tightening up the color patterns on the cards, and beginning to add rules-cards for variability were huge improvements to the pacing, tactical choices and replayability to the game. It also let us move the crazy, but very cool, cascading rule out of the core experience and save it for advanced play. Unfortunately, much like before, the game was still a race to the top. Over many plays, we discovered that nearly every time the first player to get to the top board was the winner. This was a problem.

Fun Side Note: The careful reader would notice that I now said “top”, when The World Tree had the boards laid out in a long line. The clever team at our manufacturer (Boda), helped extract the 3D board from my head and made it real. Four Pillars interlocking with clear inlays framed in cardboard perfectly captures the feeling of an open-air courtyard while still giving space for big hands to move pieces around. The new design really sold the idea that each board was “above” the previous, because now it actually was above the other board. Players loved it and we never looked back.

Back to the top… or, preventing the race to the top, rather. Wanting there to be more than a single dominant strategy, the obvious way to address the race to the top was to incentivize staying on the lower levels. In doing this, we added piles of firewood near the corners of the bottom board (and slightly less firewood on the middle board) and awarded a huge bonus to the player who collected the most firewood, and a huge penalty to the player with the least. It worked quite well, and tied in, albeit loosely -- you see, the night before the Holi festival there’s a event called Holika Dahan, notably celebrated with a huge bonfire; hence, the firewood. Explaining “why firewood” was always clunky, confusing, and not very interesting. The mechanism itself, collecting something and getting a bonus worked well, but firewood as the thematic description of the something was on the chopping block.

After development was humming along and the initial bits of art were delivered, I wanted to get some feedback from people who have actually participated in the festival. I reached out to a couple friends who both grew up in India -- Netra from the northern part, where the festival is much more common, and Sankari from Southern India.

Their feedback helped shape the game’s overall mood, focusing on joy and positive interaction, and reinforced that firewood felt really out of place (unfortunately, no better ideas, though). These conversations gave me a better understanding of the festival, helped me fix the name (it’s always “Festival of Colors”, not “The Color Festival”), focused on positive interaction (shifting the points for firewood to always be positive). Overall, I was encouraged by their enthusiasm for the game and the theme! Friends are great for that, though, so unfortunately my skeptical side kicked in. I was, of course, appreciative of the support but skeptical nonetheless; I needed to get some objective feedback.

Most importantly I wanted to be sure they both had personal experience with the incredibly rich culture surrounding the Holi festival. I was sure these people exist -- they have to!

In trying to find help for these two tasks, I started by keeping it close to home (to hopefully meet in person) in a sort of “culture first” strategy. I reached out to the Indian Cultural Group at the University of Minnesota. No luck. Then, the Hindu Society of Minnesota. Nope. Then, my distribution partner in India (Bored Game Company). Nothing. Not to be discouraged, I knew my strategy needed to change. The search continues, this time “skill first”. Thanks to Kate Bullock and Suzanne Sheldon leveraging their vast networks, I was nearly instantaneously introduced to two people who were each absolutely perfect for this project.

Sharang Biswas is a talented game designer, writer and artist from New York City who grew up in India. Perfect. Shivam Bhatt is a member of the (Magic: The Gathering) Commander Format Committee and Hindu priest. Perfect.

Several calls, video chats, and emails over the following months pushed the game from a growing flame into a full blown explosion -- and a colorful one at that! Here are a handful of the invaluable changes they helped introduce:

The Animals Are Cooler!

Moving Up the Board Makes More Sense!

I’m so grateful to have met Shivam and Sharang, and I can’t thank them enough for pushing this game forward in important ways, both culturally and for the good of the game itself.

I never imagined just how rewarding it would be to make a game with a theme from a culture I wasn’t very familiar with. I did a lot of research before reaching out for help, but nothing compares to involving people who have lived the experience you’re making a game about. It’s such a pleasure to be able to work with people with the talents and experiences it took to make our game, Holi: Festival of Colors, the vibrant, dynamic game it became. I hope it helps you to connect with this ancient Indian tradition through a different lens and brings joy to your friends and family for years to come.

has been added to your cart. Excellent choice!

Would you like to Checkout now or keep looking around?